Driven by digitalization, information sharing has been experiencing an exponential growth in the past few years. In turn, one’s eagerness to better prepare and protect depends on the ability to change the attitude from “need to know” to “need to share”. Digital technologies, most notably Artificial Intelligence (AI), have shaped decision-making, everyday communication, life and work, hence highlighting the importance of maintaining the online economy and ensuring its prosperity.

Threat landscape is continuously changing and evolving to address the evolution of the IT environment from software to IoT, via services and cloud computing. Providing an up-to-date overview of the current state of the art on threats and cybersecurity is critical to provide a picture of the status of cybersecurity and evaluate new trends in cybersecurity focusing on emerging threats and evolving attacks. CONCORDIA cyber security threat analysis is inspired by the different research domains (Figure 1) and considers the following domains: (i) network-centric, (ii) system/software-centric, (iii) application/data-centric, (iv) user-centric, v) device centric security. 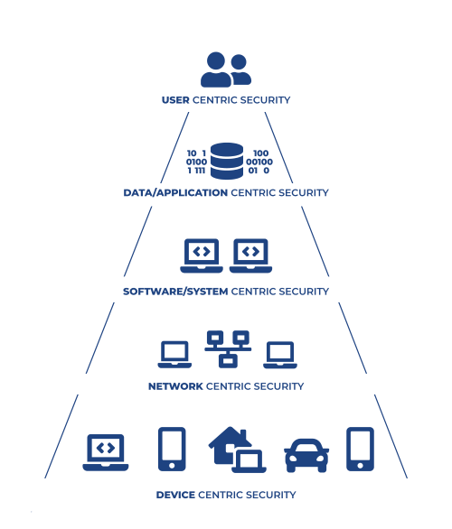 Network-centric security refers to the transportation of data as well as to the networking and the security issues associated with it. Topics range from DDoS protection, Software-Defined Networking (SDN), ad hoc networks to encrypted traffic analysis, 5G. System-centric security centers around cloud and virtualized environments, while IoT/Device-centric security centers around modern systems such as Internet of Things (IoT)/edge and corresponding devices, both targeting topics such as middleware, secure OS, and security by design, Malware analysis, systems security validation, detection of zero-days, and recognizing service dependencies are specifically addressed. Data-centric security addresses issues concerned with management, analysis, protection, and visualization of data at all layers of a given system/environment, focusing on modern Big Data environments. Application-centric security addresses issues related to the security of applications, like modern services and their management. User-centric security addresses issues like privacy, social networks, fake news and identity management. The above domains apply to any environments ranging from traditional distributed IT systems, to devices that produce raw data, such as embedded systems, sensors, IoT devices, drones, and the associated security-centric issues, such as IoT security, via service-based systems, such as, service-oriented architecture, cloud, microservices.

This analysis, which will be soon presented in the public deliverable D4.1, results in a comprehensive cybersecurity threat map (Table 1) that summarizes the mapping between generic threat groups and specific threats in the domain of interest. To this aim, threat group and threat identification have been inspired by the ENISA threat taxonomy.[1]

From the table, it emerges that threats groups are quite horizontal to the different domains. Some differences still exist due to the peculiarities of each area. Also, threats in the area of data and users are cross domain due to the fact that often data represent the target of an attack, while users are often seen both as a target and as a threat agent.

To conclude, involvement of external stakeholders is important in activities of this type. We therefore prepared a similar questionnaire available at https://ec.europa.eu/eusurvey/runner/9eec529f-9a7d-197a-93c9-618617f22031, where you can rate the relevance of each threat in the table from 1 (very low relevance) to 5 (very high relevance) in their specific area(s) of business. Let you opinion count, join us in filling the questionnaire!

'How can the community help the @Cybersec_ECCC?'🤔 We answered this question in the panel discussion at the #CONCORDIAOPENDOOR2021 event. Fortunately, you can watch the panel from the recording and find it out even today👀
🔗https://youtu.be/TXL7MZpR4UE

Today we celebrate an International day for Education!🥳
In CONCORDIA, we perceive Education and Skills as one of the key dimensions for the future of the #cybersecurity field. Read more about our recommendations for education in the #CONCORDIARoadmap:
🔗https://www.concordia-h2020.eu/wp-content/uploads/2021/10/roadmaps-05-Education.pdf