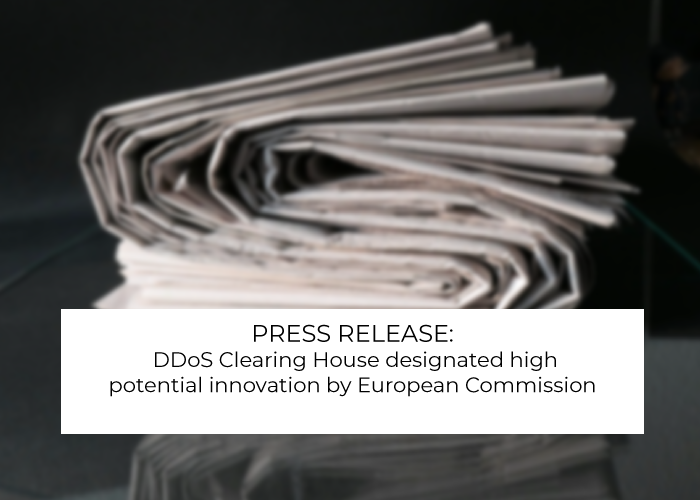 Contributing to internet security and stability in the Netherlands, Europe and beyond

Arnhem, 06 April 2021 — The DDoS Clearing House has been designated a ‘key innovation’ by the European Commission and selected for the Commission’s Innovation Radar. The DDoS Clearing House is a system that enables organisations targeted by DDoS attacks to measure attack characteristics and share the information with other member organisations. The concept is being developed by SIDN, SURF, the University of Twente and other members of the European CONCORDIA project. In the Netherlands, the clearing house will be used by the National Anti-DDoS Coalition, whose members include the Dutch National Internet Providers Management Organization, internet service providers, internet exchanges, the Dutch Payments Association, various government bodies and Digital Infrastructure Netherlands.

The DDoS Clearing House is a collaborative system that enables participating service providers to automatically share the characteristics of incoming DDoS attacks in the form of ‘DDoS fingerprints’. Other clearing house members can then be on the alert for new attacks and know what to look out for. Armed with the fingerprint data, potential victims are able to prepare their infrastructures accordingly. Comparison of a new DDoS attack’s fingerprint with details of earlier attacks recorded in the clearing house also helps members decide on the best defence strategy.

The European Commission’s Joint Research Centre (JRC) has identified the DDoS Clearing House as an innovation with great market potential. The clearing house is currently designated ‘Tech Ready’, meaning that the technology underpinning the system is at an advanced stage of maturity. Progression to the final ‘Market Ready’ stage will require market research and formulation of a business plan, for example.

Over the coming summer, the National Anti-DDoS Coalition will run a DDoS Clearing House pilot project. Octavia de Weerdt, CEO of the National Internet Providers Management Organization (NBIP), one of the Coalition’s members, confirmed, “The DDoS Clearing House is one of our coalition’s most important initiatives. Recognition by the EC emphasises that effective protection against DDoS attacks is not merely a question of fending off individual attacks. It also depends on identifying and sharing DDoS patterns. And collaboration is vital for that. Sharing data and ideas makes us all stronger.” NBIP is a not-for-profit foundation that operates the National DDoS Scrubber, ‘NaWas’, which is widely used in the Netherlands to repel DDoS attacks.

“To make Europe more digitally sovereign, we need a better understanding of DDoS attacks, since communication networks are a pillar of the European digital infrastructure. The DDoS Clearing House is of great value in this, because it provides organisations with more insights and data on DDoS attacks. This is extremely important for a better understanding of DDoS attacks in developing appropriate mitigation actions. In addition, the data on DDoS attacks helps to further develop European anti-DDoS platforms and ecosystems. That is quite challenging, since DDoS data is often ‘locked’ in the systems of anti-DDoS vendors outside Europe. We are therefore delighted that the EC Innovation Radar has identified the DDoS Clearing House as an important EU-supported innovation,” said Professor Gabi Dreo, Coordinator of CONCORDIA.

Taking defence to the next level

As Director of SIDN Labs and Associate Professor at the University of Twente, Cristian Hesselman is closely involved with both the CONCORDIA project and the National Anti-DDoS Coalition. “Recognition of the clearing house’s value by the European Commission demonstrates that, with this platform, we can take collaborative defence against DDoS attacks to a new level,” he said. “We hope that the move will raise the profile of the initiative, so that other groups and organisations start using this open-source technology. We attach great importance to the communal benefit of enhanced DDoS resilience. The clearing house makes a significant contribution to that goal by promoting internet security and stability in the Netherlands, Europe and beyond.”

For more information about how the JRC assesses the potential and maturity of innovations, see the Innovation Radar website: https://www.innoradar.eu/methodology.